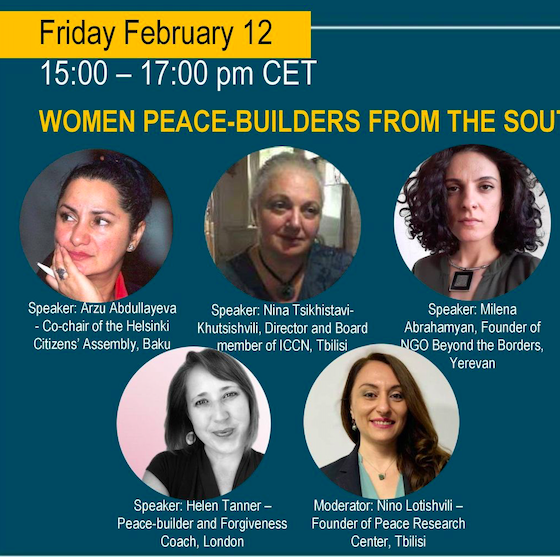 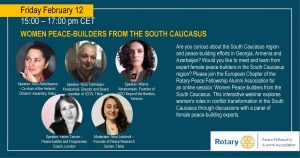 Register now for this free event at: https://us02web.zoom.us/meeting/register/tZ0rfu6gqjgiG9DByWl9DK3fAxwRnpauqnLK.

It is inspired by Nino Lotishvili’s research conducted with Georgian-Ossetian ethnocultural mixed family members living in Administrative Boundary Line villages, Gori, and two Internally Displaced Persons’ (IDP) settlements. Though the study was not gender-based, there was a high percentage of female participation (99%). Because conflict transformation processes often exclude women, this finding may suggest they want to participate in peace-building activities but feel powerless, marginalized, and disempowered to become involved on a larger scale. Considering this, the panel of experts will share their experiences on women and peace from their communities.

Arzu Abdulaeva is an activist of the democratic movement in Azerbaijan, one of the pioneers of peace-building efforts in the resolution of the Karabakh conflict. Co-chair of the Helsinki Citizens’ Assembly (HCA) International from 2000 to 2012; chair of the National Committee of HCA (ANC HCA) in Azerbaijan since 1992. The HCA is an international network of non-governmental organizations and individuals working for peace, diversity, and human rights in Europe, the Middle East and Central Asia. The Olof Palme Peace Prize (1993) and The United States-European Union Marshall Prize for Democracy Building (1998) winner, Netherlands Helsinki Committee Civil Society Award winner (2015)

Nina Tsikhistavi-Khutsishvili Director and elected Chair of the Board of the International Center on Conflict and Negotiation (ICCN). She is involved in many large-scale projects that focus on CSO’s participation in negotiations (Track 2 and Track 1,5), women’s participation in mediation, and positive peacebuilding. She also works on projects that develop the legal mechanisms to combat domestic violence, promote gender equality. In her work, she aims to work alongside governmental agencies and SCOs to create tools to effect change in Georgia. Ms. Tsikhistavi-Khutsishvili is a PhD candidate at the Tbilisi State University (TSU) (2014), working on the thesis: “The Role of Leader Women in Conflict Resolution”.

Milena Abrahamyan (Armenia) is a feminist, activist, researcher, and seeker of peace. She believes that we will have a better chance of obtaining peace by being and staying in conflict with patriarchy, misogyny, homophobia, transphobia, nationalism, and the history of colonization. She is the founder of Beyond Borders: Linking Our Stories, a project aimed at building trust and solidarity between Turkish, Armenian, and Kurdish women. She has a Master’s Degree in Peace and Conflict Research from Uppsala University where she studied as a Rotary Peace Fellow from 2013-2015.

Helen Tanner is a peacebuilder, forgiveness coach, speaker, trainer, and qualified psychotherapist. She has an extensive portfolio of working in the UK – including seven years as Charity Director – and internationally including in Botswana, Tunisia, and war-affected Libya, Myanmar, South Sudan, Kosovo, and Belfast. She is a Rotary Peace Fellow alumni and Global peace Index Ambassador. She holds a Master’s Degree in Conflict Resolution and a first degree in Law. Helen is passionate about living fully aligned to her purpose, working with integrity and Peace – in harmony with the self, others, and the planet.

This website uses cookies to improve your experience while you navigate through the website. Out of these cookies, the cookies that are categorized as necessary are stored on your browser as they are essential for the working of basic functionalities of the website. We also use third-party cookies that help us analyze and understand how you use this website. These cookies will be stored in your browser only with your consent. You also have the option to opt-out of these cookies. But opting out of some of these cookies may have an effect on your browsing experience.
Necessary Always Enabled
Necessary cookies are absolutely essential for the website to function properly. This category only includes cookies that ensures basic functionalities and security features of the website. These cookies do not store any personal information.
Non-necessary
Any cookies that may not be particularly necessary for the website to function and is used specifically to collect user personal data via analytics, ads, other embedded contents are termed as non-necessary cookies. It is mandatory to procure user consent prior to running these cookies on your website.
SAVE & ACCEPT
Share This